As much as I complain about the weather and how much I dislike snow and winter and everything that involves being cold for months on end, I LOVE living where we do.  Besides the amazing friends that I've made, we also have great parks, a fab church, and, something that we utilize to the fullest extent, the best library around.  Their children's' programs are always fun, the librarians are extremely friendly and helpful (Maya actually pretends that she is "Miss Sarah" or "Miss Stacey" sometimes and reads books to Charlotte <3), and they have a free playroom that is open 3 days a week with all kinds of fun and educational toys.  The girls and I usually go a couple of times a week in the winter (in addition to going to "Story Time") and it is so nice to have an environment that is kid-proofed and full of fun new toys!  Bonus?  My house doesn't get destroyed every afternoon! :)  We do clean up the library playroom before we leave, but for some reason it's always easier to clean at someone else's place than at your own.  I often go to the playroom with the intention of reading (either for Bible Study or Book Club), but usually end up meeting with friends instead :)
Last week, we met with Sierra and Emily and their respective children.  The girlies had fun and I got to talk to grown-ups ~ win win! 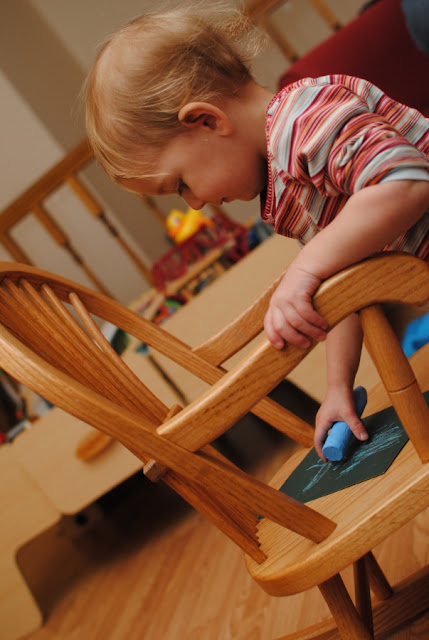 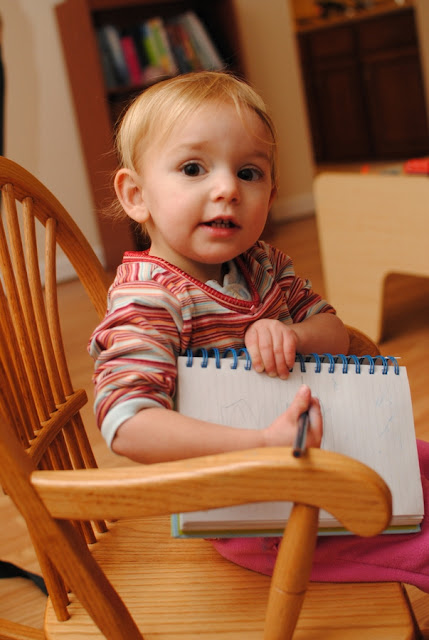 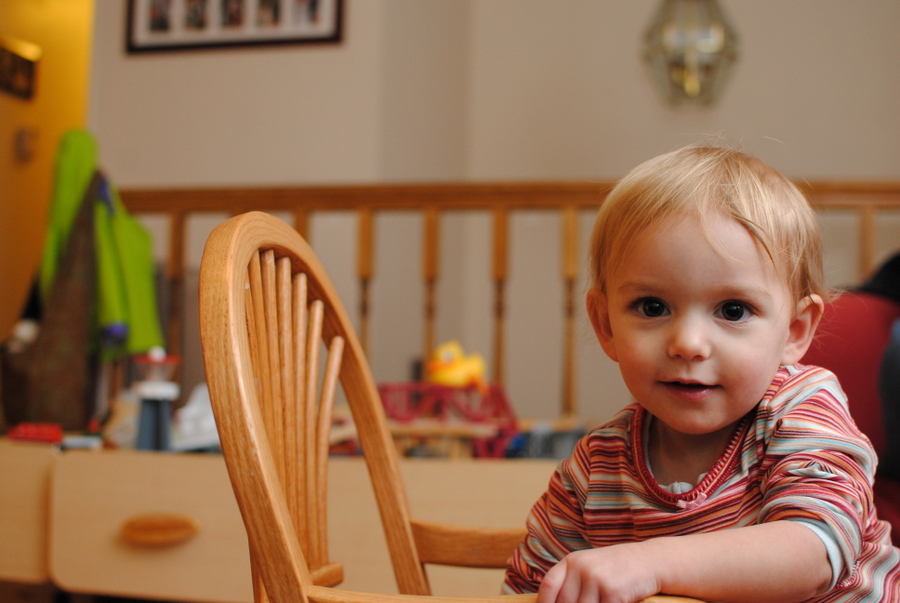 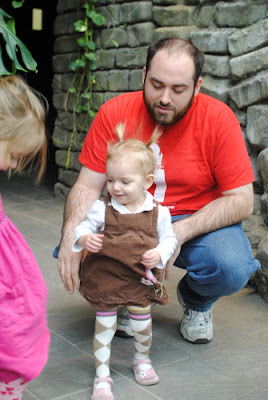 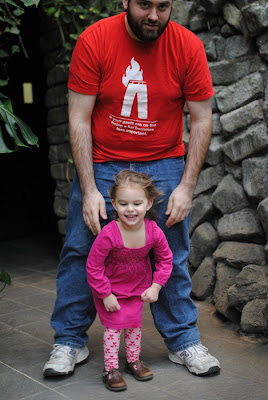 I'ma pretend it's spring.  The snow is almost melted and we've gone outside to play 2 days in a row (yay!).  Charlotte basically hates life when I tell her that we're going outside, while Maya thinks it is the best.thing.ever. and will run around and be Little Miss Helpful trying to get Charlotte excited.  I finally got Charlotte to stop crying (who cries at being outside when it is WARM?????) by putting her in the swing.  It was a slight improvement, but only lasted a few minutes.  Finally she had had enough and I put her inside, where she watched from the back door while Maya and I played.  At least she wasn't crying!
************************
The other day, Maya wanted to take a picture of Michael, Charlotte and I.  She got us all arranged and started snapping away.  After each picture she would look at her camera and say something like, "Oh, that one's cute.  I'm going to put it on my blog." lol :)
************************
And now, of course, pictures.  You will notice Charlotte's sour expression in the swing contrasted with Maya's "I'm so excited the joy is just bursting out of me" expression, as well as the general lack of pictures of Charlotte.  Maybe tomorrow I can convince her that being outside is a fun time! 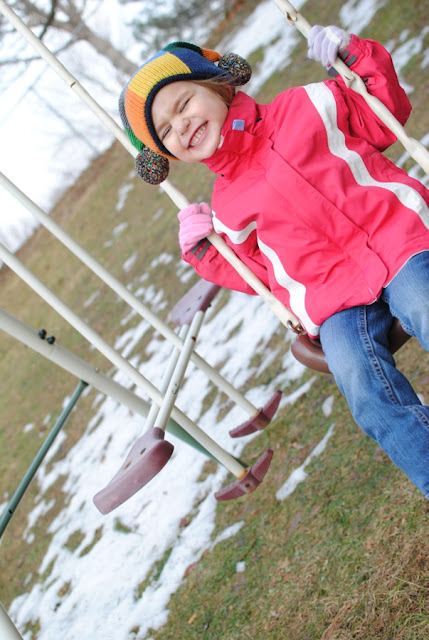 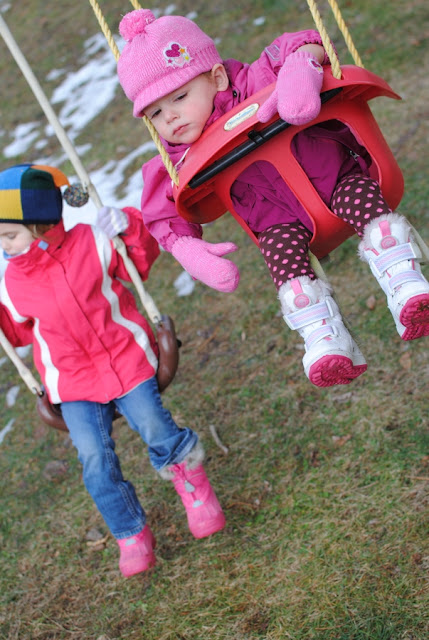 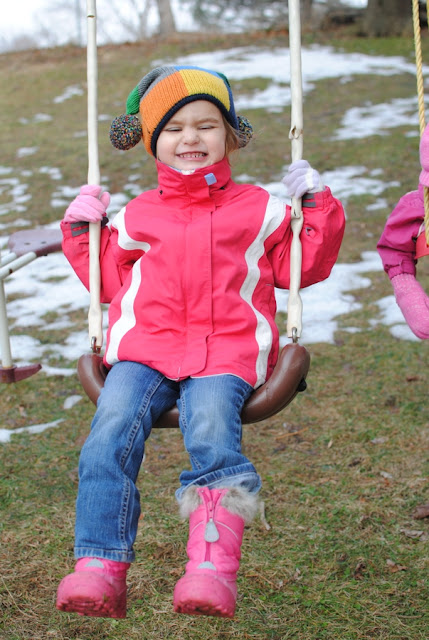 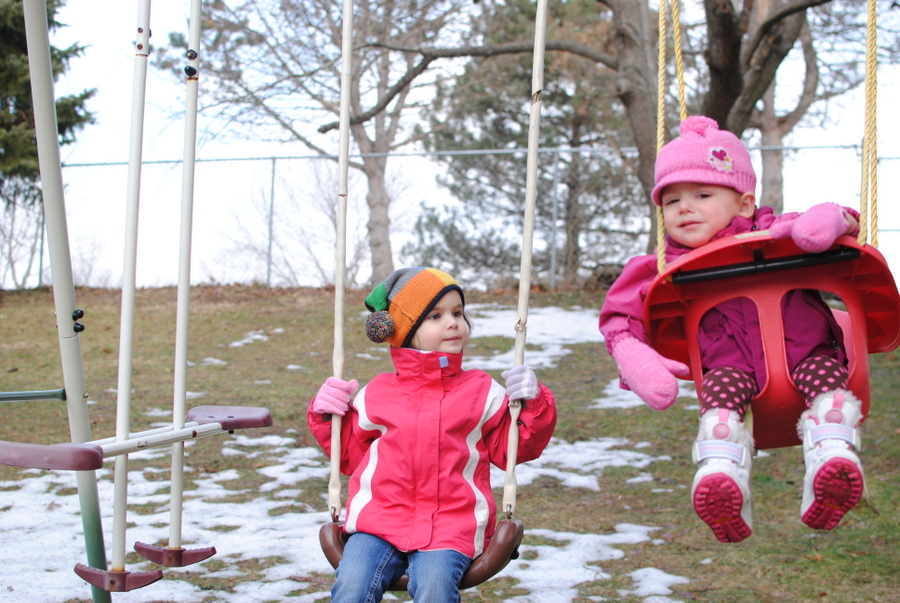 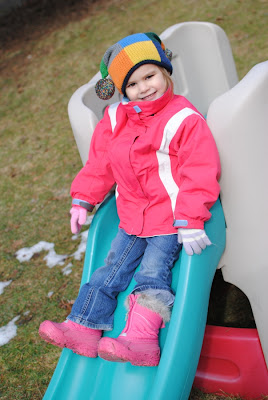 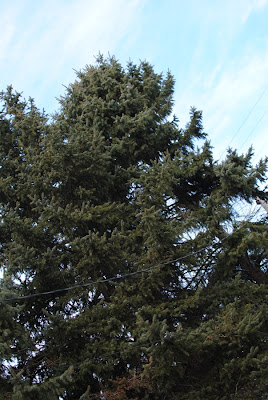 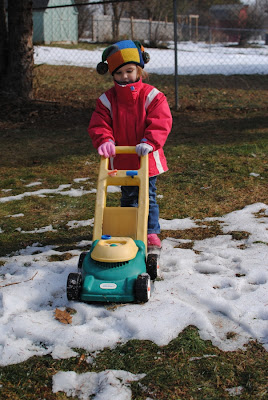 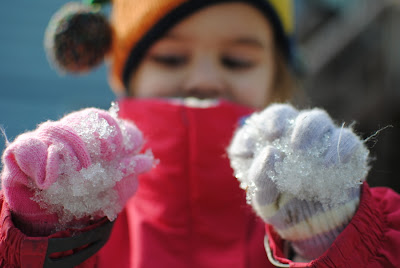 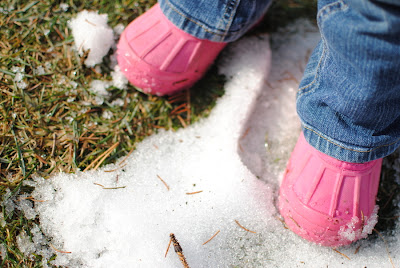 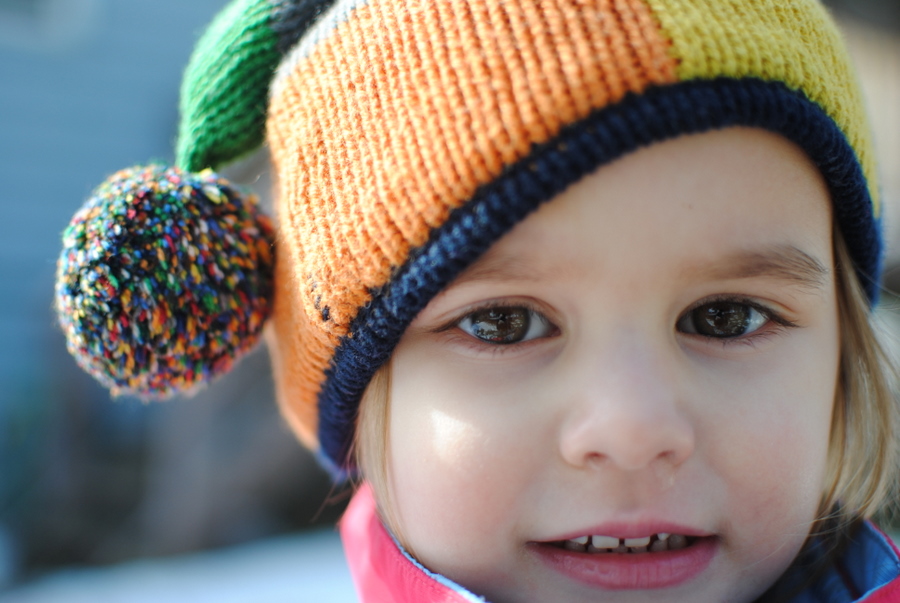 Ever since our household was sick, I've been having a tough time getting back into the swing of things.  Not to say that I normally have it all together (far from it! :)) but this week has been especially hard.  I blame the extra cold temperatures for my lack of motivation to even pick up my camera (I KNOW!).  But, yesterday some friends and I got together at a friend's house and had a mom's night in, and it was spectacular.  I love those nights when we are all laughing so hard that we lose track of time, and I think it gave me just the boost I needed (ok, that and the large amount of vitamin D my midwife has me taking! :)).  I actually folded laundry this morning, and I won't embarrass myself by saying how long it's been...but let's just say the girls were tasked many times this week to go get their clothes off of mommy and daddy's bed instead of out of their closet!  Michael and I even forewent "family nap" today (which has really become a Saturday tradition!) so that we could put the kiddos to bed a little early and watch a movie without Charlotte trying to run back and forth on the couch/climb onto the kitchen table (no joke), and without Maya asking us every 5 minutes what is happening and why such-and-such character said what they said and what will happen next and why that person is wearing shoes (yes, that is a common question around here).  Bonus of kids sleeping while we watch a movie?  It doesn't have to be a cartoon (woohoo!).  I mean, I love me some cartoons...but sometimes I just need something with a little more substance and a little less princess :P
And now for your viewing pleasure, here are some random pictures from this week! 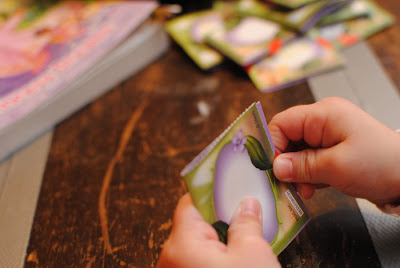 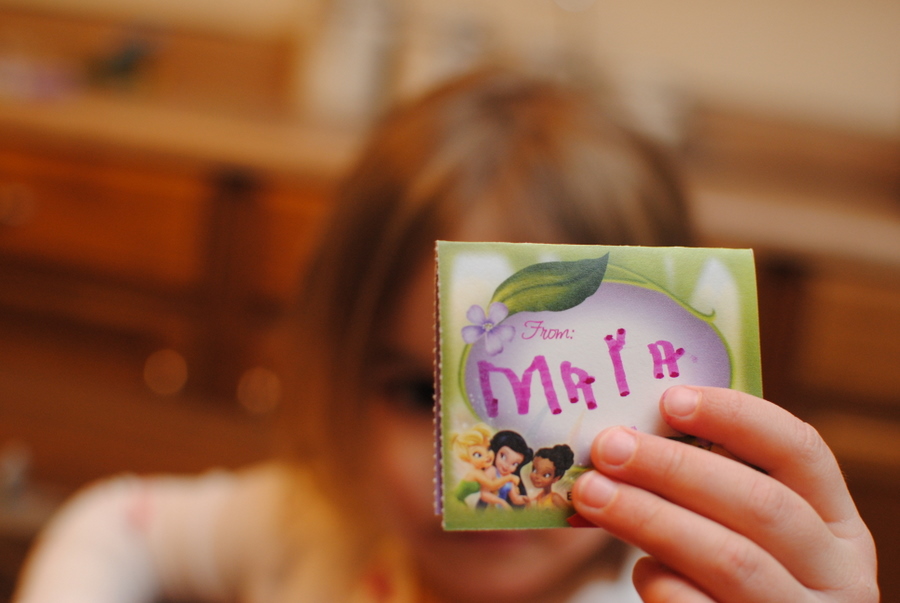 Good Thing My New Year's Resolution Was To Gain 40 Pounds ;)

Thanks to Michael for the awesome editing on the video!

To be clear ~ even though it sounds like Maya said "brother and sister", she meant *or*.  There is only one baby.  Promise.
This one will likely arrive sometime at the end of August :)
Posted by Sarah at Thursday, February 03, 2011 2 comments:

When I woke up this morning and saw that schools were closed again, I have to admit to being pretty excited.  Who knew that, as a parent, I'd be more excited for snow days than I was as a student!  Today's snow day was a bit more warranted, though, so we stayed in for the most part.  There was a lot of wind which meant a lot of blowing snow, as well as a fair bit of ice coating everything (and not in the, "oh look how pretty" way, either, cause the sky was gray gray gray :P).  After breakfast, we spent a fair bit of time cleaning up the playroom in the basement.  A few weeks ago, Maya was having an extremely defiant day and I was having an extremely low-on-patience day, so when she refused to clean up her toys I packed up several boxes and put them in the laundry room, out of reach.  She pretended to not care (even had the audacity to *help* pack up the boxes, which only made me more frustrated!) and since then has not mentioned them.  So, imagine my surprise today when I pulled out the boxes today and she was SO EXCITED to get her toys back!  Now mind you, my children are NOT short on toys.  Like they have entire shelves brimming with toys, as well as a well-stocked train table AND art table (that used to be a coffee-table-with-storage, in our kid-free days :P).  So it's not like she didn't have a million other things to play with (which is why I kinda thought she had forgotten about the ones that were put up).  The first thing she did was to tell Charlotte that they need to take better care of their toys, and that they should start by emptying the boxes and putting the toys back on the shelves.  That's right, folks, she cleaned.  Voluntarily.  It was her own idea. I pretty much passed out on the floor, stunned.  And then of course I helped her clean, because oh my goodness she was cleaning voluntarily.  And you know what?  For the rest of the day she was not only in a good mood, but she was nice to her sister (!) and took a nap with Charlotte and I without complaining or wiggling or talking (!!) and after dinner and bath even said, "ok, Mommy, it's time for bed" (!!!).  Don't worry, I'm not delusional enough to think that this is the new normal :P  But, I do think that Maya is benefiting from all the time we are being forced choosing to spend at home.
After cleaning up, we had a pretend picnic (with the play food and dishes that had been banished to the laundry room).  At dinner time, when we did our "what was your favorite part of the day" game, she said that the picnic with her sister was her favorite thing.  Oh my.  Yes my heart melted into a puddle.
In the afternoon, after naptime, both girlies helped me make "pumpkin" muffins (and pumpkin is in quotes because it was actually butternut squash ~ gotta make-do with what you have!).  They turned out delicious, and I'm pretty sure the girls would have eaten the whole batch if we'd have let them!
Finally, after dinner we had chocolate cake.  Why?  Because it was a snow day, that's why.
For the past several weeks we've all kindof been in a funk, what with the gross weather and busy schedules and NO SUN AT ALL (thank you NE Ohio), and I've seen the effects in the kids.  There has been more fighting and more yelling (from me) and more general ickiness-in-attitude all around.  But yesterday and today were just so so fun ~ it reminds me of something I read a long time ago in a marriage book.  I'm going to do a terrible job paraphrasing, but basically it said that, if you want to see if you are doing a good job in your marriage, just look at your spouse's countenance.  I'm realizing that it is the same with being a parent ~ if I want to know if I am doing a good job, I need to really look at my children.  Are they happy?  Do they smile and giggle and seem carefree?  Or do they frown and sulk and whine?  I'm not saying that children only whine when their parents are being terrible (because oh my goodness I would be winning the "worst mom of the year" award right now!), but in general I feel like if I am doing a good job, it should show on my kids' faces.  Lately there has been a LOT of whining and fighting and crying and general discontent, and we have gotten stuck in a cycle of MORE whining and MORE fighting and MORE crying.  But, today showed me that we can break the cycle!  Y'all ~ Maya was smiling in pictures!  On command!  I'm not saying that tomorrow will be perfect and that my kids will never whine again (although that would be an amazing miracle and I'm not saying I would be unhappy with that at all!) ~ I am just reminded that if I put in the effort to be happy and play with the kids and give them the attention and the love that they are craving, we can all enjoy ourselves a bit more :)
Sappiness over.
I will leave you with the prayer that Maya said at dinner tonight:
"Dear God, we have so much to love you, and thank you for making us, and that was so polite.  And dear God, please make Isabella to feel better.  Amen." 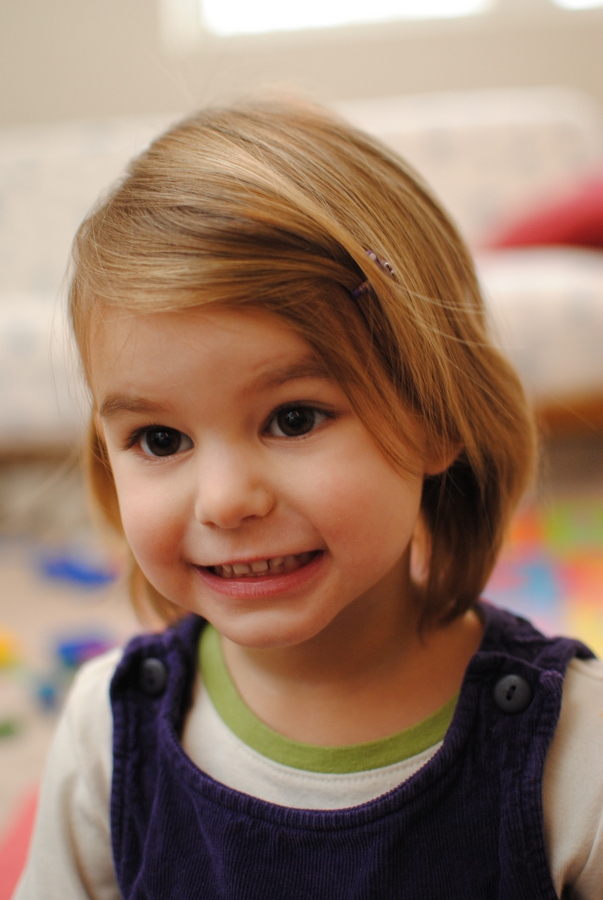 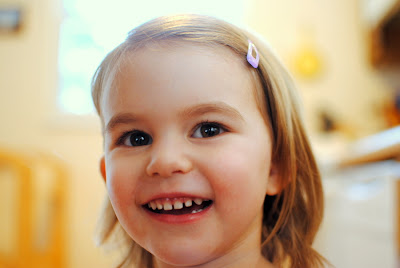 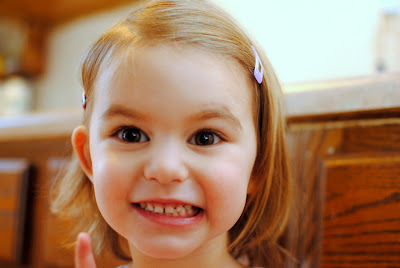 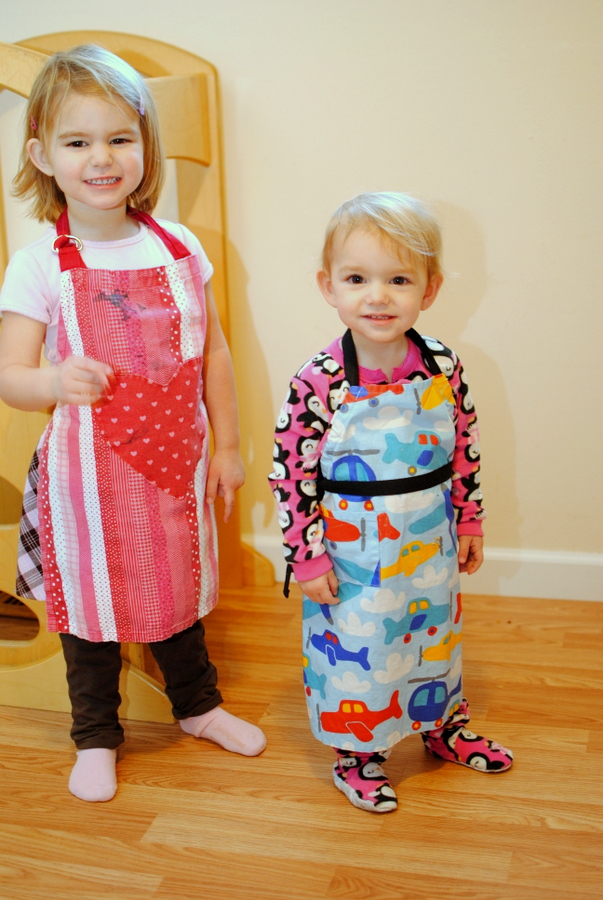 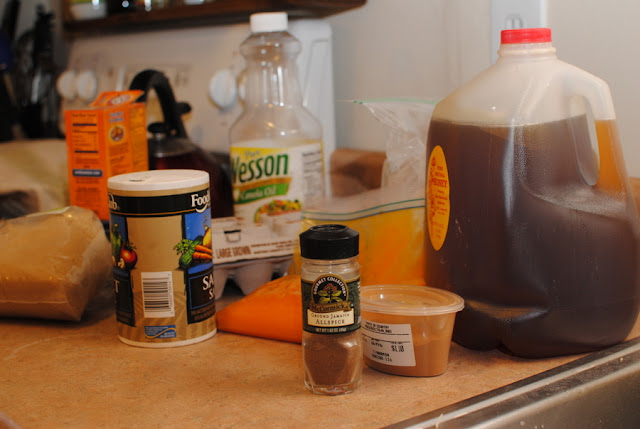 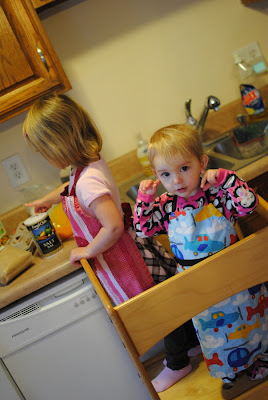 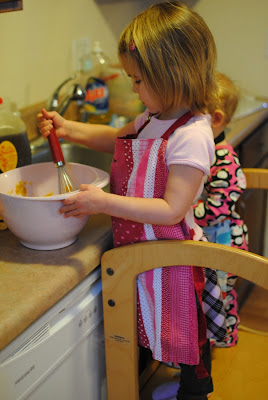 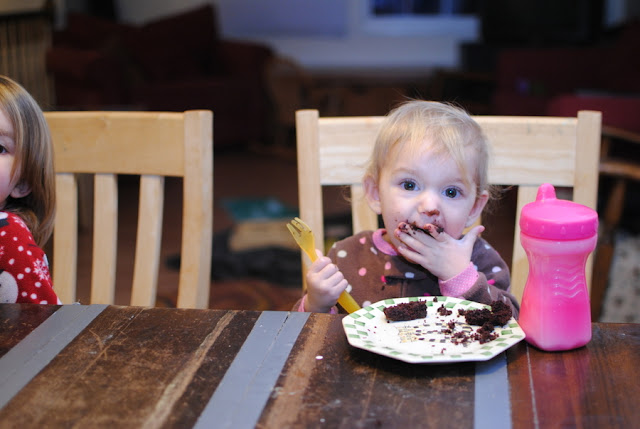 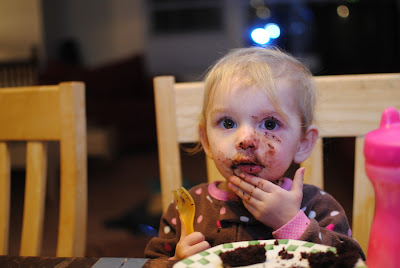 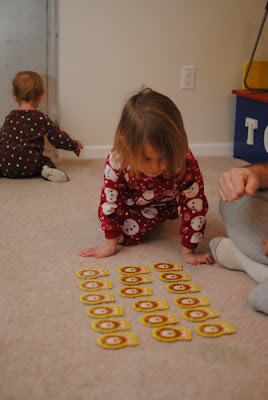 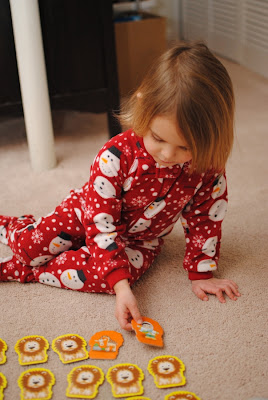 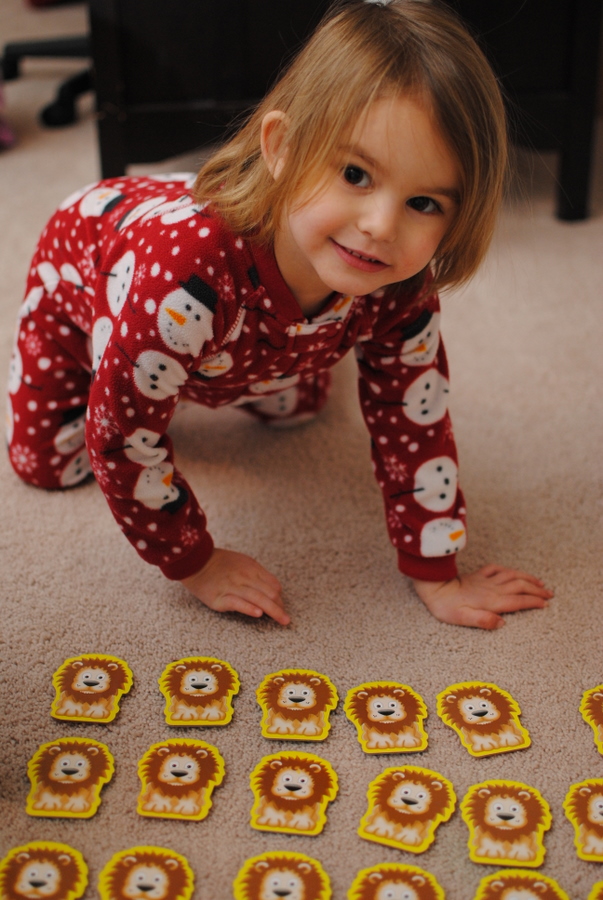